Well that is Round 1 out of the way, and I’m glad of it. 2 days of utter stress, as a car that had proven bomb proof through 200 laps of track days suddenly decided to develop issues. However a 3rd place a finish on my debut is something I am happy about, especially given the issues and lack of top speed.

On the Saturday morning, the car had to get a Power to Weight test to determine it’s power, and the car was nowhere near ready with sudden brake issues, so that was 4hrs of running about like a headless chicken. Anyway, a 16hr day later I was home in bed. Power to weigh – however the power to weight test revealed a few issues, the car is running rich and only making 155 bhp! More on that later. 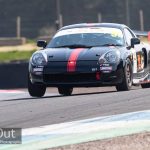 Race day, a 5.30am rise and the drive from Ayrshire up to Knockhill. Got there, and did the usual checks of fluids, pressures, systems, etc.

So time for the morning practice sessions, I was in Group 1 with class G, F and some E cars. My car never completed a lap before I had pulled onto the grass, broken down. Out came the red flags and my session was over about 23 seconds after it started. The car was running like a bag of nails, something had happened to the VVTi and it wasn’t running correct. I managed to source one somebody who initialised the ECU but the car ran, albeit with no VVTi. The result was a loss of speed of about 6-7 mph on the straights and about 1.2 seconds of time losses per lap.

I missed all of 2nd Practice too, not wanting to risk the car. So qualifying I went into with the mentality of just setting a lap, and getting some points. Overall I got some good running in, but the power deficit was clear, and despite setting my fastest time ever between Duffus and Chicane, I lost that time – with interest  – on the full throttle sections between chicane and the start/finish line. However 5th place in qualifying  wasn’t the end of the world. My car was easily the slowest in class F through the speed trap, so it was always going to be a struggle.

Then for the ‘super lap’ final – a single flying lap where it all comes together for the big points. I really struggled to get my rear tyres up to temperature on the out lap (this will be a recurring theme with the AR1 on the MR2), but the flying lap went OK despite the power loss – but….. I managed to finish a completely unexpected 3rd from 14 in the class. It’s my first ever event and the two guys who finished ahead of me had loads more experience and are pretty serious drivers – it was fair to say I was delighted with the result.

The SLS paddock also seem really helpful and friendly, and I’m looking forward to Round 2 at Croft in a few weeks time.

Going forward it will be getting whatever the issue is repaired – it seems like the VVTi isn’t cutting in and the car lacks top end power, so for the next event, it’s get that fixed and map the car again.

The next round is at Croft circuit, a track with fast, flowing corners and one which suits the car.