Well that is the conclusion of the Super Lap Scotland 2019 season. A frustrating season, blighted with reliability issues, but ultimately ending on a positive note for the 2020 season.

I’ve wanted to do motorsport since I was a wee guy, but any one of time/money/work has prevented it from happening. I only started doing track days in February and started competitive motorsport in April, so really this has been a long-time ambition. Yes, the season has been blighted both with bad preparation and bad luck but met some great folk along the way. However, I’ve won a trophy every time I finished this season – just a shame about the 5 rounds I never due to various mechanical issues!

Saturday Round 7 – Knockhill Reverse Direction
I went into the Saturday nervous for several reasons, after the shambles that was round 5 & 6, I had the gearbox refurbished and replaced the clutch – I was nervous as neither had been broken in properly. The Kevlar material on this clutch came with specific instructions to cure the friction material by running it in – and that would cause me a lot of problems as you can’t really run in things on a non-road legal racing car. I also had never really driven the reverse direction – the previous round was my first effort, but the tyres were not even warm before the car broke. 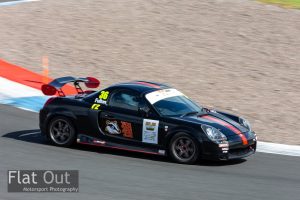 The day could have started better – in the warm up I made it out of the pit lane and that was about it. The car cut out almost immediately, and despite having half a tank of fuel it was suffering fuel starvation issues. It had done this before during the preseason and filling the tank to the brim cured it – however that meant carrying 30kg of weight that wasn’t needed – but given the season we’ve had, that really is the least of the problems. Funnily enough, ensuring the tank never dropped below 2/3rds full fixed the issue!

Morning practice gave me the chance to get a run of laps together for the first time in reverse, building up the speed and trying to learn the braking points – most other drivers have had at least some other experience this season of reverse, so finishing 5th with a 1.02.7 wasn’t the end of the world – I reviewed my footage and data, and managed to establish my braking points for qualifying, knowing that I was leaving loads of time on the track.

Onto qualifying, and despite a bit of clutch slipping, I managed to qualify in 3rd with a 1.01.7 – although my session ended early due to said slipping. It is a strange problem, it only effects the clutch once warm but… it was slowly getting worse.

For the final, I was confident I could improve as again I felt I was leaving a load of time out there. I put together a slightly ragged lap, but ultimately a 1.00.7 and my fastest of the day – good enough to take 2nd place.

Given all the issues I had, and lack of experience of doing the reverse direction, I was pleased with coming in what was an unexpected 2nd place.

I knew today was going to be hard as my clutch kept slipping as the car got warm, so I was only ever getting 4-5 laps at a time, then it was session over. However, set a competitive time of 1:00.4 in the morning warm up, 2nd in class overall – before traffic and clutch issues ended my session. However, a clunking noise on the downshifts appeared and it emerged that I had cracked my gearbox casing at the mounting point and had developed a bit of a slow leak, so the diffuser was a bit of a makeshift drip tray.

Due to the leak, and patch up to mount the gearbox study, morning practice was just a shake down to see if there was any knocks or noises, and I only posted a 1:06 – however that was fine as speed wasn’t important for that session.

With the clutch issues, I went into qualifying knowing I would only get maybe 3 attempts at a hot lap – a little frustrating as my first effort was thwarted by a yellow flag (ultimately the yellow flag lap was my qualifying time), and despite trying my best to make space for myself, leaving a 6-8 second gap, my other 2 laps were thwarted by traffic (as per video). After that the clutch heated up and started to slip and I qualified a disappointing 5th with a 1:01.7 – however I was guilty of some tardy driving when I thought I’d try again after letting the clutch cool for 5 minutes – and taking back onto track with a car that wasn’t working very well – ending up getting towed off track.

Onto the final, and the clutch just about held out long enough to (just) grab 2nd place, behind the class F champion Marc Kemp – ultimately the clutch gave out completely and had to rather undignified, be pushed away from the pace setter box and out of the pit lane, dripping gearbox oil and I think that pretty much sums up my season.

All things considered, I should be delighted with coming in 2nd – despite the issues. However, I find myself disappointed – not with my position – I don’t think I could have beaten Marc without him making an error – but with my time. I really felt the car could drop into the 59’s today without the issues. Putting a positive spin on it I think that is a measure of how far that I have come this season from being scared at round 1 of coming last, to being disappointed with a 2nd place.

I’m certainly no superstar driver, and I’ve came into motorsport too old to do anything other than have fun, and ultimately that is what it is all about. The car has proven that if it can get running right then there is competitive machinery at my disposal. Losing so much seat time this season due to reliability has seen both the car and my own development stall – the cars set up remaining totally unchanged since April. Getting the car right over winter has to be the priority,

A big thank you to Iain and Aldo, who have been invaluable. I learned the hard way that doing this by yourself is a huge undertaking – running a race car isn’t easy, the easiest bit is driving it – even at grass roots level. These 2 had a huge contribution in making the weekend possible.