Well, what a weekend – for all the wrong reasons.

The car had been dogged with issues since the last SLS meet in April and they hadn’t fully been fixed. However to Croft we went. Testing on Friday, well…. 4 and a half laps in and well, the engine lost power followed by the noise of valves being destroyed.

That wasn’t ideal. Terminal, even.

However – Ebay – and found another engine from a breakers in Doncaster, so off in the pickup I went to collect it. 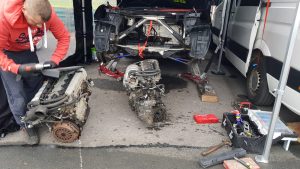 Class G, was an absolute star in fitting this engine for me.

However…. The new engine was put in and well… it maybe wasn’t quite what was described as a bench tested engine – basically water was coming out of the exhaust pipe as it turned over and quite obviously a very damaged head gasket was going there – a complete waste of time fitting it, and that was my weekend over before it even started.

Going by the 3 laps I did get in, I feel that breaking the 1’40 barrier was going to be relatively easy. However it was not to be, and 2 events in and my first DNS. A lot of money spent, and a lot of travel and effort to get no running in. Double gutting as I feel that was a great opportunity to land another podium and some good points on the board.

Anyway, hopefully get the car running for the June double header. 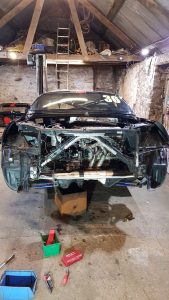